If you are just starting to ride a scooter and are wanting to learn some cool tricks and moves, make sure you are wearing protective gear. Wearing protective gear can make the difference between getting a scratch or going to the hospital, so make sure you’re wearing it at all times when scootering. As a beginner rider, you should start out learning some of the easier tricks. Even though most of these are considered easy tricks, they are also used to connect tougher tricks together and for use in combos. Each trick and move is important, so try to learn to do it the best you can. You may be using it later to amp up a difficult combo! Here’s some of the best scooter tricks for beginners to start learning first.

Most often referred to as a hop or an Ollie, this is one of the first tricks a beginner should learn. It’s a gateway move that can be used for learning other tricks, such as whips or grinds. To hop, you need to bring both wheels of your scooter off the ground at the same time. Basically, it’s just jumping with your scooter. Begin by slowly rolling in. Bend your knees, pull up on the handlebars, and bring the deck up with you. Land with your knees bent, and roll away.

A fakie is riding your scooter backwards and is an important move to learn. Learning to fakie will allow you to do tricks that require riding backwards, either going into a trick or coming out of one, such as a 180 or a nose whip. This simple move requires balance and control. The easiest way to begin practicing is by rolling slightly up a pipe or ramp, then allowing gravity to take over, making your scooter to roll backwards. Be sure to keep you and your handlebars straight. As you’re rolling backwards, keep your balance at all times. Keep your eyes on your front wheel, steadying your balance by moving it only a small amount as needed to stay rolling in a straight line. Roll backwards as far as you can.

Manual is basically what you’d call riding a wheelie if it were on a bicycle; it’s just riding on the back wheel of your scooter. It may sound easy enough, but it actually takes a lot of practice to get it right. If you pull up too hard, your scooter will fly out from under you. If you don’t pull up enough, you’ll struggle to keep your front wheel off the ground. Once you get the hang of it, though, it’s a great move for creating combos. Begin by rolling along at a comfortable speed. Use your arms to pull your front wheel off the ground without hopping. Most riders like to keep their foot hovering over the brake during this trick. If you’ve pulled your wheel too high, just slightly tap the brake to bring the wheel down a bit. If it’s too low, use your arms to pull it higher, locking them into position. When you’re ready to leave a manual position, lightly press your brake to drop the front wheel back down and roll away.

These are three of the easiest best scooter tricks for beginners to learn, but they can also be incorporated into harder tricks and are even used by pros. Once you’ve learned these tricks, you can move on to harder ones. Here’s a list of more beginner best scooter tricks you can work on. Good luck! 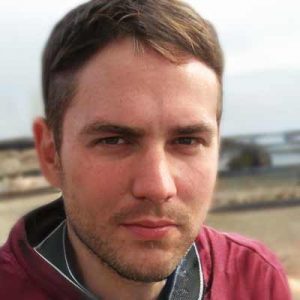 Welcome to my Blog. This is Robert L. Williams! Author of this blog. I like to play and review scooters. All of my reviews and guides have considered numerous existing buyer reviews and also have done extensive research. Without seeing a product, it’s really hard and time-consuming to find out the best sports gear for your kids. So don’t worry, you are in the right place. My reviews and guide will help you to make a quick decision to select a product within your budget. Thanks!!!

proscooterreviews.com is a participant in the Amazon Services LLC Associates Program, an affiliate advertising program designed to provide a means for sites to earn advertising fees by advertising and linking to Amazon.com.